Towards a Paradoxically Parallaxical Postdramatic Politics? [2013]

“Drama is no longer capable of representing the great ‘contradictions’ of our ‘mediatised and globalised’ society – one replete with ‘social and political conflicts, civil wars, oppression, growing poverty and social injustice.’ For Lehmann, then, the postdramatic reflects the real ‘retreat’ or ‘unravelling’ of the dramatic imagination. And in the place of ‘realist’ representation, Lehmann locates the postdramatic, a theatre of ‘partial perspectives and stuttering answers that remain “works in progress.”‘ Lehmann insists that he is not interested in a simple, unmediated one-to-one mapping of the ‘real’ and the ‘aesthetic.’ And yet, it is the postdramatic that brings us closer to the ‘real,’ and to the ‘political’ – no longer by means of ‘dramatic’ representation, but by mediated ‘reflection.’ On the other hand, to move ‘beyond’ for Lehmann is precisely to undertake a simultaneous process of engagement with and differentiation from the very thing that is superseded. In other words, any move beyond the representational entails a deep engagement with representation itself. As Lehmann explains, ‘Theatre is a practice [. . .], which like no other forces us to realize “that there is no firm boundary between the aesthetic and the extra-aesthetic realm.”‘ It is a practice that is ‘at once signifying and entirely real.’ And while the postdramatic critically questions the representational status of the dramatic, and foregrounds ‘real’ elements, it also clings tightly to its aesthetic (or representational) status, foregrounding its ‘signifying’ elements, its ‘fictive cosmos’ – albeit a cosmos quite different from a dramatic cosmos. The postdramatic, therefore, develops what Lehmann calls an ‘aesthetics of the irruption of the real.'”

Link to the Book 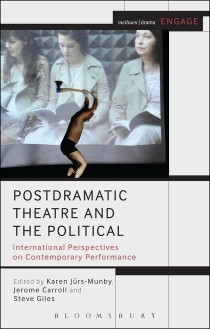