A Performance Project in Progress

Bloated & Blues is a participatory Passover Kabarett – part live-music performance, part ritualized meal. But this is not your everyday – or every-Passover – matzah-meets-pork-chop, Black-Jew review. It is a Kabarett, in the most German sense of the word: an interdisciplinary and highly-politicized (though often satirical) exploration of the most pressing social issues of the day. This musical and culinary investigation into the state of Black-Jewish-relations draws initial inspiration from a fateful meeting in April ‘69 when anti-Vietnam-pro-civil-rights Jews sang “Dienu” with black Christians in the basement of a church in a D.C. suburb to mark and mourn the year anniversary of Dr. King’s assassination. But Bloated & Blues departs from this inevitable ‘60s point-of-view, when Jews and Blacks found themselves on the same side of many issues, to think through and publicly perform together the challenges of our contemporary multi-cultural, multi-racial harrosset-horseradish sandwich. 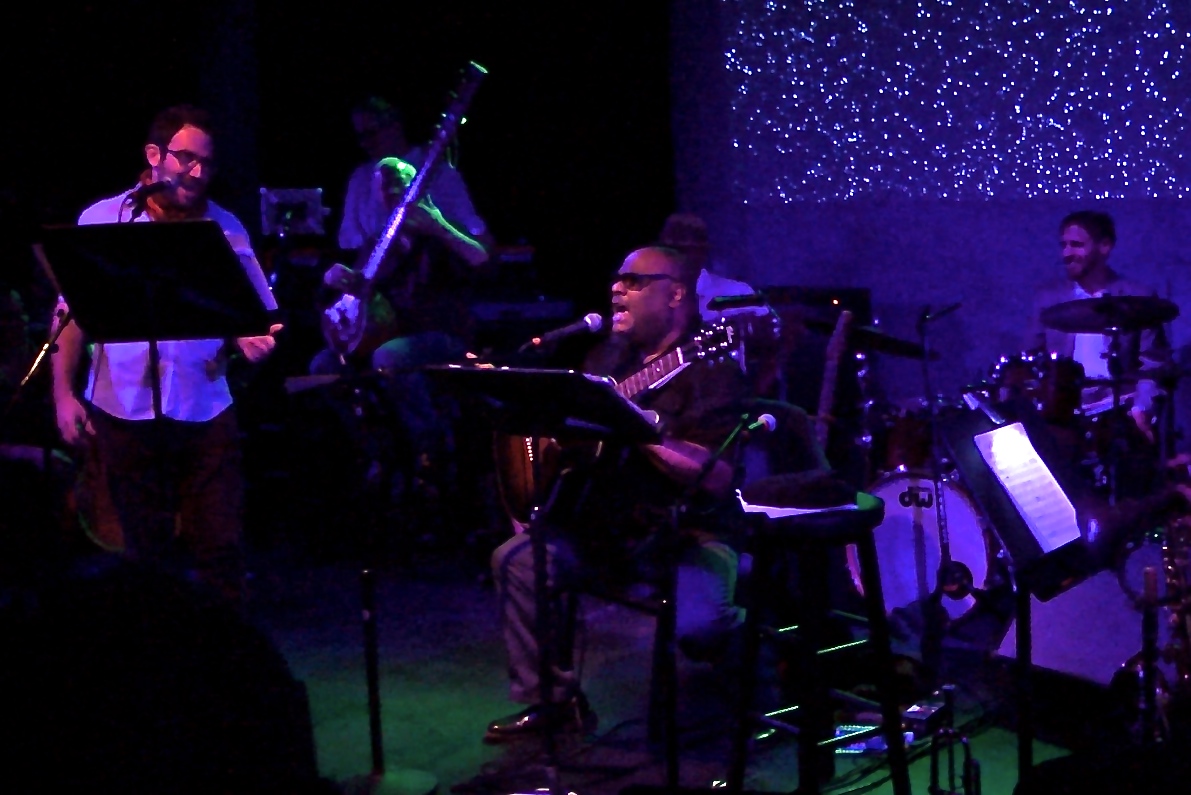 Stew & זאב (a.k.a. the Woolf) make up the spaciest (and most well-read) Bar-Mitzvah-cover-band-hazzan-hosts you’ve ever come across – even in Brooklyn. Stew grew up in the Fairfax district of L.A. among the loudest, fatty-liver-noshing, self-righteous of West-Coast-Yids, who wore their suffering like purple tuxedos and bushy Eliot Gould (or was it Richard Roundtree?) sideburns. The Woolf grew up in the Long Island burbs with a healthy dose of guilt about his live-in West-Indian Nanny, all-the-while loving without remorse on her roti and curried goat, attempting to replicate her recipes while dancing around the kitchen to George Clinton (or was it Louis Armstrong?) LPs. We met in Berlin, where we discovered that we both grew up pro-Israel, turned anti-Israel when it seemed like the right thing to do, and are now well-poised for that unending and always uncomfortably loud argument over settlement seltzer manufacturers. Our partnership in food and song is what might have transpired if Sammy Davis, Jackie Mason (and Mickey Mantle, an honorary guest) hid in a back-corner booth of Canter’s or Katz’s sleazing leftover pigs in the blanket, debating Jolson and Farrakhan, Herzl and Garvey, Hettie and LeRoi, Hassids and Black separatists, while dreaming up the next inevitable, late-night, egg-foo-young order. While this performance serves up just the right dose of gallows humor to mask the burn of the bitter herbs, it also hopes to discover in performance an unimpeachable emotional foundation and connection. Irreverence serves reverence in an effort to tease out – aesthetically and politically – rather intangible Kabbalistic truths about belonging, collaboration, and civic responsibility. Through the intersection of music and theater, public ritual and participatory art, we invite a diverse public to sing, to daven, to cook, to think, to eat, to drink, to welcome Elijah, to meditate on exile, on diaspora, on community, on freedom, and to utilize music and food to probe the thin veil between the sacred and the profane.